My interpretation of certain key verses of Revelation 9 is based on these assumptions:  First, John is aware that his audience readers extends beyond the seven churches he names in Chapters 1, 2 and 3.  He’s aware that the Lord has chosen him to fulfill the role that the Book of Mormon prophet Nephi prophesied he would fulfill, as I set forth in Part 1 of this essay.  He knows that prior to the Millennium,  his revelation will be the world’s only available scripture describing Earth’s entire history.  Therefore, the events set forth in his narrative won’t be trivial or obscure ones; rather, they’ll be momentous, enormously consequential ones which can be identified after they’ve occurred.

END_OF_DOCUMENT_TOKEN_TO_BE_REPLACED 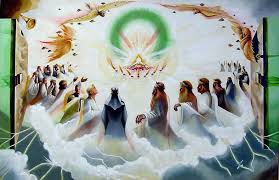 In the latter part of this essay, I will propose that certain words written by John in the ninth chapter of the Book of Revelation refer to Hitler’s rise, Hitler’s conquest of Europe and the Normandy Invasion in which the forces of good combined to liberate the Jewish and Christian world from tyranny and destruction.  I’ve never heard anyone express most of the views contained below, but I have heard and read a great number of views reaching  different conclusions.  For proof of this, one might visit biblehub.com and read the various interpretations of Revelation Chapter 9 from a host of biblical scholars.  The uniqueness of my interpretations, and especially the fact that I interpret scriptures the LDS Church has declined to interpret, motivate me to explain why I presume to venture into this doctrinal territory.