In most of the articles on this website, I have stressed the point that The Church of Jesus-Christ of Latter-day Saints (hereafter “LDS,” “Church” or “LDS church”) teaches myriad ideas which run contrary to the unambiguous teachings of the Book of Mormon.  Most LDS church members are surprised and/or upset by this assertion and skeptical of its accuracy.  But to prove its truth, I urge readers to ask themselves if, during the April 2020 LDS general conference, they noticed any point in any talk where a scripture was quoted by a general authority which was at odds with the version of the same scripture in the Book of Mormon.  It absolutely did happen, as we shall see. END_OF_DOCUMENT_TOKEN_TO_BE_REPLACED

In recent essays on this website, I have discussed two critical Book of Mormon scriptures (2 Nephi 4 and Jacob 2 and 3).  The exegesis of those verses by the LDS Church (hereafter also referred to as “the Church”) has been woefully inadequate and misleading.  I’ve hypothesized that these two scriptures contain troubling messages which contradict current LDS teachings, thus motivating the Church to ignore, downplay, confuse or misrepresent their messages.  In this short essay, however, I will discuss a scriptural passage that’s not only extremely important to all students of the Bible and/or the Book of Mormon, but should be crowned the most overlooked scripture in the entire LDS canon.  It’s 3 Nephi 15:22-23 (when considered in connection with 3 Nephi 16:4).

Before proceeding any further, I encourage readers to read 3 Nephi 15:22-23 in context from the excerpt following this paragraph and ask themselves two questions:  First, do you remember ever in your lifetime hearing any lesson in Sunday School, Relief Society, Priesthood meeting, seminary, Institute or college religion classes, or any talk in general conference, stake conference or sacrament meeting which discussed these two verses? END_OF_DOCUMENT_TOKEN_TO_BE_REPLACED 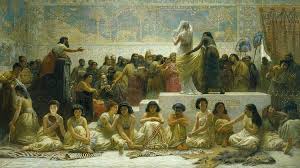 In Part 1 of this essay I included the excerpt below from the LDS Church’s Teacher Manual for seminary (i.e., high school aged) students.  This excerpt is taken from the Book of Mormon lesson wherein the content of Jacob 2 and 3 is addressed. Readers may wonder why I didn’t include material from the lesson covering Jacob 2 and 3 in the Church’s Book of Mormon Teacher Manual for Institute (i.e., college aged) students.  (I truly do hope readers wondered that.  It would mean the reader is intellectually engaged in the discussion of this topic, for one thing, and that question naturally inheres in a discussion about how the LDS Church teaches difficult subjects.  But in this case, the question also leads to a very interesting answer.) END_OF_DOCUMENT_TOKEN_TO_BE_REPLACED

In two unique chapters of the Book of Mormon, 1 Nephi 13 and 14, the prophet Nephi, writing during the 6th century B.C., relates what an angel showed him in vision about the future history of Christianity in Europe and the Americas.  One of the most salient features of his vision is a description of what happens after the Old Testament Jewish scriptures and the New Testament Christian gospel have been recorded and written in their uncorrupted form1 by Israelite and Jewish writers of the Old and New Testaments.  Over the centuries, as these records and writings coalesce into what is known today as the Bible2,  they are then adopted and accepted by Christians as canonical.  Thereafter, the Bible comes into the possession and control of what the angel and Nephi refer to as the “great and abominable church.”  The result is that the biblical message, formerly pure, becomes corrupted in the way it’s taught to Christianity’s adherents.  Specifically,  the church’s teaching is observed to be missing “many plain and precious things” which have been “taken away” or “kept back” by said evil church.  See 1 Nephi 13:26, 28-29, 32, 34, 40. END_OF_DOCUMENT_TOKEN_TO_BE_REPLACED

In his October 2016 LDS General Conference address “If Ye Had Known Me,” Church apostle David E. Bednar began his address by citing to an example in the scriptures wherein Joseph Smith had supposedly corrected erroneous language in the King James Version (hereafter “KJV”) of the Bible.  The scripture Bednar accepted as mistranslated was Matthew 7:21-23, which we find near the end of the Sermon on the Mount:

Not every one that saith unto me, Lord, Lord, shall enter into the kingdom of heaven; but he that doeth the will of my Father which is in heaven.

And then will I profess unto them, I never knew you: depart from me, ye that work iniquity.

Bednar commented:  “Our understanding of this episode is enlarged as we reflect upon an inspired revision to the text. Significantly, the Lord’s phrase reported in the King James Version of the Bible, ‘I never knew you,’ was changed in the Joseph Smith Translation to ‘Ye never knew me.'” Bednar then went on to partially base his talk on the verse that Joseph Smith had reworded in his “inspired” revision–Matthew 7:23.

The problem with Brother Bednar’s assumption that Joseph Smith’s revision was inspired, and that the King James Version of this scripture was in error and not inspired, is that the Book of Mormon version of this same scripture agrees with the King James Version, and disagrees with Joseph Smith’s revision.  The same Sermon on the Mount that Jesus delivered to the Jews was also delivered almost word-for-word to the Nephites.  It is found in 3 Nephi 12-14.  The counterpart of the King James Version verse that Joseph Smith saw fit to modify is 3 Nephi 14:23.  Its wording is identical to Matthew 7:23 in the KJV; the phrase in question reads “I never knew you,” not “Ye never knew me.” END_OF_DOCUMENT_TOKEN_TO_BE_REPLACED